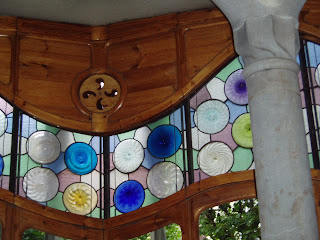 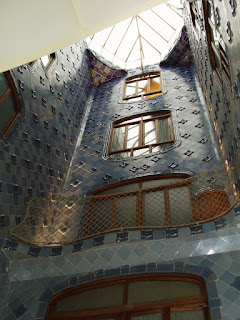 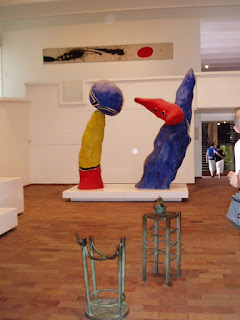 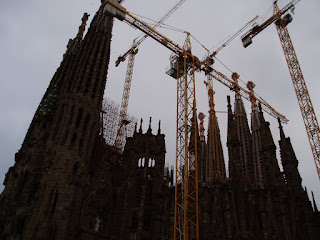 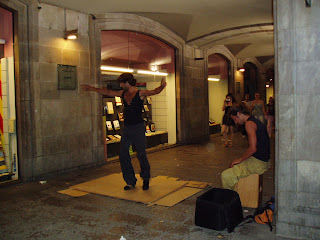 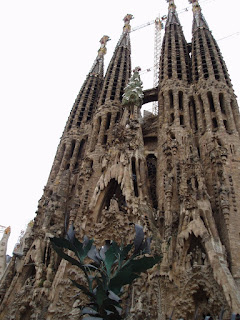 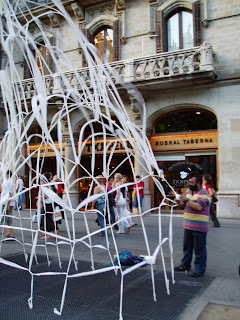 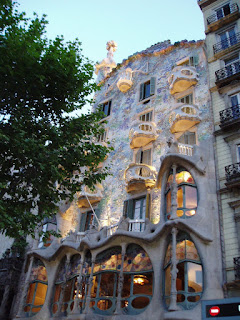 Gaudi, gaudi, more gaudi, Miro, the toilet paper artist, and probably the sexiest dancer I have ever seen. I always assumed the word gaudy comes from the artist, yet it is apparently not so.
I took the overnight train from Paris on Friday, spent Saturday night in Barcelona, took the overnight train back on Sunday to arrive in time for work on Monday. Heaven!
I saw and learned much about Gaudi, visited the Battlo House, Guell Park and La very famous Sagrada Familia, (or, as I like to think of it, our lady of perpetual construction.) Also went to a Miro museum, walked up and down La Rambla, where my hotel was, numerous times, observed the various living statues, some terrific, some mediocre, and stumbled across a fantastic dancer dancing in an arcade off the Rambla on a piece of cardboard, with a man accompanying him on a cardboard box.
The toilet paper guy's sculpture, held up by the air from a grating above the subway, was incredible, but he was an incredible grouch, yelling at me for taking a photo without having given him any money first. I had actually been planning too, but then chose not to.
I recently found out that one of my fellow volunteers on a previous trip, to Romania, had been living in Barcelona and performing as a living statue for quite a while, and during the times I had visited. ( I visited again more recently, with Carolina, in 2007.) Wouldn't it be strange if I had walked past Mina in her guise, and never known it?!

Posted by Joanna at 5:24 PM No comments: 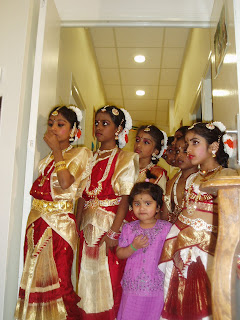 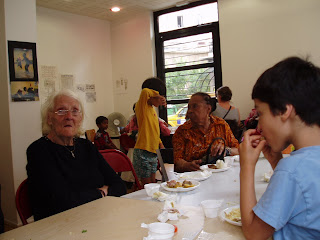 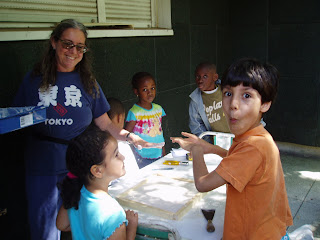 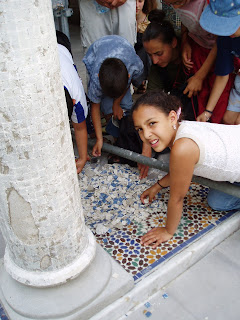 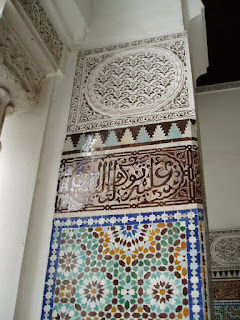 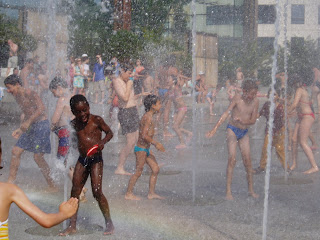 So, I find myself, summer of 2005, in Paris, ready to go to work. Who would have thought Paris a likely location for a volunteer project? Of course, the moment I saw the listing I was ready to go. The project was to work with an arts association, in a housing development where most of the tenants were immigrants. The building was constructed around a courtyard that had fallen into disrepair, and where some of the young adult tenants would hang out late, to the frustrations of many of the other tenants, some elderly, some with young families.

The project had been described in the listing as to design a garden with a human rights theme. Some of the volunteers had interpreted that as actually constructing the garden, and were frustrated to discover that we were going to theorize and design the garden, which would actually be built later on. I, however, had interpreted it as the arts group, Compagnie Resonances, had intended, which was definitely my preference!
We were housed in a dorm like -building where foreign students rented rooms. It was much more creature comfortable than any of my previous volunteer stints (real beds!) but certainly less luxurious than any of my previous stays in Paris, except perhaps for my "maid's room" during my own student days. (I think all those garret cubbyhole rooms have since become chic studio accomodations.)
Much to my delight, the building we were working in was a few blocks from my favorite flea market, at Clignacourt metro, to which I scooted over during any opportunity.
Many days, we went on excursions to various Paris parks and playgrounds, in small groups of volunteers with kids and adults from the community. Other times, we brainstormed and built models of our conceptions of the courtyard design, again along with community members. One day, we visited the Paris mosque. I had been there before, on a previous trip a few years back. I don't think most of the residents of our building, many of whom were Muslim, had been. We arrived to discover that the mosque was being renovated and wasn't open for tours. But our group leaders apparently convinced them, and we did get a guided tour. Although the mosque is not terribly old, they were stripping all of the mosaic tiles on the floor, walls, and pillars, to be replaced with newer ones. I was sad and elated at the same time. There seemed to be no need to replace the beautiful mosaics, but on the other hand, perhaps we could recycle them? I had one of our group leaders discuss it with the mosque folks, and, next we knew,plans were being made to send a truck to bring some of the blue and white, gold and silver tiles back. The kids also collected a few and put them in their pockets. So did I.
The volunteers each designed our own visions of what the garden should be. Mine included, of course, mosaic tiles, along with words of peace and understanding. On the last evening we all presented our proposals to the community at a wonderful pot-luck prepared by the residents. After supper, we had an amazing dance presentation but a small group of Sri Lankan children. A couple of the girls had danced for us the first night, at a welcome party, and we had been so enthralled that we had asked them to dance for us again. This time they wore intricate costumes, and make up that it took their parents about an hour to apply. In the audience, in addition to us volunteers, were a variety of people from the community. One elderly white woman, who had appeared at several events during our stay, and seemed to perhaps suffer from dementia ( I imagined that she had lived in the building for many decades, before the population had become largely immigrants) sat watching, a small boy from an African family sitting on her lap. It is an image that stays with me strongly.
I don't know, and continue to wonder, if the garden actually was created and if so, what it is like and how it is used. And if it never did materialize, does that negate the whole experience for the volunteers and for the residents? I think not, although I certainly hope there is a garden there, and that it, and most of all, the people who live there, are thriving.
Posted by Joanna at 1:06 PM No comments:

Continuing on, backwards in time. Amalfi, Pompeii, and more

Well, the year has ended, but my journey continues, as all of ours do. We are at the cusp of potential great change. I am as expectant and hopeful as anyone, and hope we will not be disappointed.

Although we have moved on from 2008, I will at least temporarily keep my blog named so. And now, let me continue back in time, to one of my previous volunteer experiences, to Paris. Odd place for a volunteer experience, you might think. And it was, but was also one of the most amazing times I have ever spent in Paris, giving me a far different perspective on the city and its culture than I had ever had. Paris, where I have probably spent more time than anyplace except New York, where I grew up, Albuquerque, and Somerville and Beverly Massachusetts, my home now for over 30 years. My first trip to Paris was the summer between my junior and senior years of high school, my second was for two years, in 1969 to 1971. I have been back various times for short visits. Is there anyone who doesn't like Paris? I suppose there must be.

My trip began as a family trip to Italy, where we stayed in a village called Atrani on the Amalfi coast, literally around the corner (or curve in the hairpin curve road) from the town Amalfi. We could and did walk to Amalfi (Loring actually swam, and I walked, carrying his glasses) most every day. Atrani is charming and much less touristed than Amalfi, and I highly recommend it. It had a bakery and a small food store, and even its own beach. No hotel. We stayed in a rented apt. called Casa Marco, which I would also recommend. It had stunning views over the village and the ocean. Marco, the owner, welcomed us with a freshly made Caprese salad.

Pompeii was a day trip. We had not rented a car, and were glad of it, given the narrowness and tortuous curves of the road. I had been to Pompeii in 1970, and had always wanted to go back. The kids, when we'd proposed the idea several years earlier, were worried that the volcano might explode. We reassured them, to no avail. So we went elsewhere that year. And, amazingly, Vesuvius did erupt that year.

But they were older now. I enticed them with the film of Pink Floyd playing live at Pompei. That seemed to do the trick. And they were, at least for the first hour, intrigued. The lava encased bodies stored casually in one of the first rooms were compelling. I was as amazed by the place as when I'd been there 30 years before. But the heat was brutal that day, and everyone else's attention span lasted last long than mine. I still was marvelling over ancient bath houses and mosaic walls when we left.

Capri (emphasis on the first syllable) was another day trip, by boat from Amalfi. I knew it would be overtouristed, and so was partly prepared, but not entirely. The island was crawling with tourists, many in large groups fronted by sign carrying guides. A babel of languages encased the place. Whatever charm had ever been there was drowned, at least from our perspective, by too many visitors. It isn't a place I'd choose to go back to. And yet, not so far away on the coast, was little Atrani, so close and yet so different from the overpopulated places nearby.

We went to Ravenna as well, up the hills from Atrani. One could climb the hills to the town. Loring and Max did, Carolina and I took the bus. Ravenna is beautiful, and famous for its opera performances, but also overtouristed. There were a few too many chic cafes for me, but also small lanes with vines wrapped around their gates, and absolutely stunning vistas. We all walked back down, not seeing many people at all along the way.

And now, onto gayParis!
Posted by Joanna at 10:05 AM No comments: