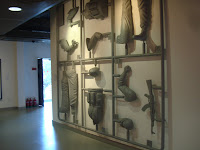 The "Suicide Bomber" piece at the Museum on the Seam.

I went in search of more info about the "COEXIST" logo and bumper sticker. Here is what I found. A Polish artist, Piotr Mlodozeniec, designed the image for a 2000 exhibit at the Museum on the Seam, which later travelled around the world.

The singer Bono later used the image prominently in his Vertigo tour. Bono says he first saw it spray painted on a wall in the United States.

An American company in Indiana filed for, and received in 2005, a US trademark for the image. They later filed suit against other online companies that were using it. The artist was surprised to find out that his image was being used for profit by multiple companies. He did not approve of the companies using it. He did, however, say that he supported Bono's use. Later, however, Bono's people chose not to meet with him at one of Bono's concerts.

The Museum made a statement that Mlodozeniec had signed an agreement with them at the time of the original competition, that they had sole authority to permit use of the image.

All of this was as of 2005. I can't seem to locate anything more recent.

As a 2005 article on the subject was headlined, "Can't we all just coexist?"

On a tangentially related subject, the Museum itself has been boycotted by the Arab family that had owned the house and was ousted in 1948. They, as do many Palestinians, believe that they were unjustly removed, and that issue needs to have been dealt with before a subsequent use was determined.

I don't actually find, by the way, the image above particularly appropriate to these comments. I posted it before I knew the direction this was taking. A powerful piece, though.