Back to Paris, but first back to Thailand, and then to Transylvania! 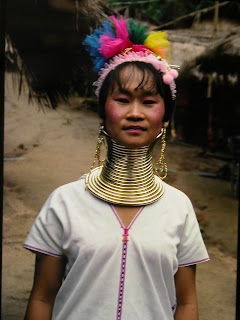 I am ready to embark on my next adventure. ( No, that's not me, but a young woman of one of the Karen hill tribes in northern Thailand, near the border with Burma.)


My bags are literally packed, two days before I leave. My blog revives after a dormant winter. And where am I going? To Paris, once again, and once again on an arts related volunteer mission.

But before I can begin to relate my next adventures, I must catch up on the previous volunteer trips I haven't yet documented.
My first experience with Volunteers for Peace, and with volunteering abroad, was in 2002. I pored endlessly over the 1000's of listings, with not a clue of where I wanted to go or what I wanted to do. I knew only that the types of experiences that appealed to me involved working with kids and social services. That ruled out a few thousand! Many projects involved manual work, restoration or maintenance of parks, monuments, etc. Wonderful sounding projects but not for me. ( Little did I know that 6 years later I'd be hacking through stinging nettles overrunning a cemetery! )

Somehow I narrowed it down to a couple of dozen possibilities, then finally to a couple, and than made my choice, to go to a school in Turkey, somewhere on the ocean, for two weeks. I put in my application on a Friday afternoon. Monday, I got the word that the project was full, the last spot having been taken on Friday.

So, plan 2: I applied to go to southern Thailand, to teach at an elementary school. I had considered a different program in Thailand, living and working with hill tribes. But the listing cautioned about the remotemess and rusticity. I chose the school, but by then was intrigued by the hill tribes. And, I could not see going to Thailand for just two weeks. So, I booked my ticket to Bangkok, went north to visit the hill tribes, then south for the project.

Need I say that it was a wonderful experience? I wouldn't be here, ready to embark on my 6th volunteer stint, if it hadn't been.

One thing I learned quickly, and tell everyone who considers this kind of volunteering, is to expect the unexpected. Things don't usually go just as you imagine they would. And that was particularly true of my Thai and Romanian experiences. (Yes Transylvania is in Romania. Did you know that? Not sure I did before I signed up.)

In Thailand, we were supposed to stay at the headquarters of the sponsoring group, Greenway, about an hour from the school. But they had more volunteers than originally planned. They split us into two groups, and one, mine, was brought to the village where we'd be teaching. I don't think I would have had anywhere as wonderful an experience at the headquarters. It was a little too hippy dippy for me, and I much preferred staying in the village with local folks. We were put up in a house that belonged to the brother of one of the teachers. He had recently been widowed. He moved in with his sister, and all of us volunteers slept on the floor in two bedrooms, 6 in each. The house was relatively modern, tv, fine plumbing, etc. The "kitchen", though, was typically Thai, outdoors. Our hosts, the teachers, cooked breakfast and dinner for us. Wonderful Thai food, although nothing I especially recognized from Thai restaurants here! The one thing that gave me pause, and that some of the volunteers politely refused, were the fried frogs. They were whole frogs, and fairly large at that. The teacher/cooks were so proud that they were freshly caught. How could I say no? I still feel badly about the sheep's eye I was offered, and turned down, as the guest of honor, years ago in Morocco.

The trip from the village to the school would have been about a half hour walk. We were taken, though, on the backs of the students' and teachers' motorbikes. Most of the other volunteers were young Japanese and Korean girls, very petite. They rode three on a bike, one student and two volunteers. I, as the oldest by far, had only one bikemate - the principal! As we whizzed down the road, I asked her if there were laws about how old one had to be to ride a motorbike. She grinned and said sixteen, which none of these students was close to, I was sure.

The common language of the program was English. And really, more than anything, the goal was to expose the students to some English. However, only one volunteer and I were native English speakers. And her British accent was so thick that I literally had a harder time understanding her than the Asian volunteers! The Asian young women, and one young man, were earnest and worked hard to teach the students some English. Their accents, though, were so terrible that it made me cringe, hearing the equally earnest Thai kids repeat the volunteers' pronunciation! Yet, how could I correct or criticize? And really, was the point for them to become fluent, or to become enthusiastic learners and communicators? Clearly, I answered myself, it was the latter.

We went on various excursions with the group, which is a hallmark of all of these volunteer projects. We visited a wonderful set of falls where families picknicked and swam. Also, the principal took us to visit a local monastery. Monasteries there are very much a part of the community, in fact most young Thai men spend a year as monks, and just a minority stay permanently. We brought gifts for the head monk to distribute to families, food, and most memorably, rolls of toilet paper. I did feel a bit odd presenting the toilet paper to the head monk. Then he asked if we would like to see the body of the previous head monk, now deceased. We were taken into another room where, in a glass casket kind of like an aquarium, there was a body lying preserved in liquid. Certainly an impressive sight! It didn't seem like we were supposed to be especially reverential or prayerful. So we all just stood around for a few minutes. As I remember it, the current head monk was smiling all the while.

Joanna~ Your blogs are given me incentive to pursue one of these fabulous sounding experiences! I am truly inspired. Much toudh base when you return! Happy travels. J Dooley

ooops I guess I am logged in under my son Greg's acct. Joanne D