And back to the cemetery 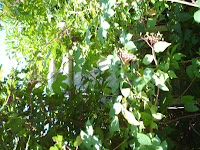 For these photos, I would like to thank Marilena. Although I took them, it was on her camera, after mine no longer worked. Marilena is from Italy, but had been living in Warsaw and studying Polish. She met Marcus there, who is Swiss and was also studying Polish, and they came to the volunteer project together. Marilena said Marcus made her come, but I don't really believe that! They made a very nice couple, yet were apparently going their separate ways after the project.

The first photo gives you an idea of the density of the foliage. The second shows some of the brush accumulated, which was then burned. This was several days worth. When we left there were still large piles, which I hope and trust have also been burned by now. 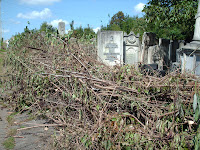 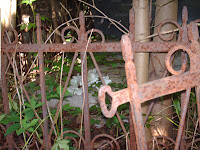 And this is just one of the many spots I walked past every day, neglected, yes, but also hauntingly beautiful.

I don't have photos of myself at my great grandparents' graves, although Pedro should have them on his camera. I will hopefully get them and post them here. Photos do exist, though, and I had brought them with me. A group from Canada had apparently photo documented the entire cemetery some years ago. Given the size and overgrown state, I find this remarkable. But, as Mimi pointed out, they were here in the fall when the foliage was gone, and they spent a month here. It was actually due to those photos that we were able to locate my family graves. Jasmin, group leader and detective par excellance, noticed that the two were flat topped, where many others were curved. Serveral volunteers were then able to find both Sure and Mortche Glaubach.

I am going to leave Czernowitz now, and take you to Krakow and then Prague. But before I do, I want to make sure I have mentioned all the volunteers: first, Basia, from Poland, and Jasmin from Germany, the two co-leaders, who made a great team. Then Ola, also Polish, Marilena from Italy, Marcus from Switzerland, Shannon from the U.S., Clare from Australia, Pedro from Sweden/Portugal, Sofie from France, who I don't think I have mentioned before now, but one of the sweetest people I've ever met, Katia from Germany, very bright and politically aware (and nice!) and me. That was the official group, to which I have to add Marina, who has offered to maintain my family's graves, Costa, who joined us many days, and Lukash, Ola's high school friend from Poland who decided to come join us the 2nd week. What a great group of people.

I will hopefully post the photos of my great grandparents' graves, once I get them from Pedro! (Pedro?!)
Posted by Joanna at 2:22 PM