Scenes of the city 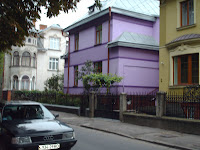 These brightly colored houses were just across from where we were living, and give you an idea of the fairly upscale neighborhood. A beautiful park was virtually outside our door. 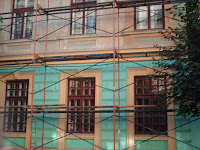 Everywhere in downtown Czernowitz there was preparation for the upcoming 600th anniversary celebration in October. Buildings were being painted, and it was interesting to notice the contrast between old and new. In some cases the new color combination were a bit garish, and I preferred the "before" to the "after." But I decided I rather liked this one. I wonder how historically accurate the new colors are. The buildings in Prague are painted in similarly bright color combinations.
Posted by Joanna at 2:00 PM