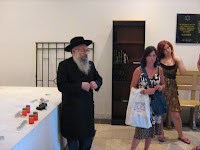 I give credit for these photos, in Sadagura, to Ola, from Poland, one of the group. By this time my camera was no longer working. Ola is a kind and generous person, and I don't think she will mind my using her pictures! She was very helpful to me in translating, because she speaks Russian, as well as German and English. She and I were partners in handing out fliers: I would mutely put one in front of someone, and she would explain! In the picture listening to the rabbi, are Shannon, the other U.S. volunteer, who is in the Peace Corps in Ukraine, and Clare, who is just 18 and recently graduated from high school. She is from Australia.


Sadagura is where my family actually is from. It is across the Prut River from Czernowitz, was a separate village, but is today a suburb of the city. There was a small graveyard, and I would guess I also have relatives buried there. The rabbi from Czernowitz provided the synagogue van and came with us. He is the one who maintains what he can there.

Sadagura was also the home of the "Wonder Rabbi" (I love the sound of that) in the 19th century,who dispensed advice to Jews and non-Jews alike, was known widely, and is mentioned in various places in literature. He lived in a veritable palace, which is featured on postcards of the time. The building is still there, but in ruins. We were let in by a man who I assume is the caretaker, although the rabbi had said it was too dangerous to go inside. I am glad we did go, but had the sense that it was upsetting for the rabbi to visit. 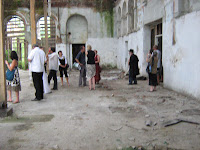