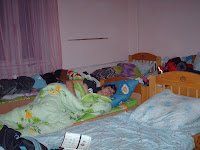 Here's a couple of views of inside the house. It wasn't fancy, but definitely luxurious by volunteer project standards! We even had sheets and towels, and they cleaned our rooms until we were embarrassed and told them not to. 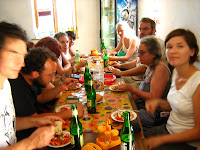 We cooked for ourselves and ate pretty well, had enough money in our budget to afford plenty of fresh fruit and veggies and cheese and meat for those who were so inclined(about 1/3 of the group was vegetarian.) But on a couple of nights Christian, who along with Mimi was responsible for making this project happen, cooked for us, delicious stuff. And one night, after we'd visited Sadagora and the Wonder Rabbi's Palace, he read to us from literature referring to the Wonder Rabbi, and from poetry by Paul Celan, the famed Czernowitz poet who survived the Holocaust but committed suicide in the 1970's.
Posted by Joanna at 2:48 PM