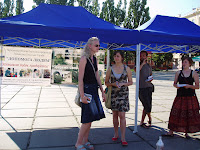 One day we worked with a local agency to advertise the project,make the public aware of what we were doing, and invite people to join us. The local group had printed fliers, made a large banner with photos of the cemetery, and set up a tent on one of the main plazas. That's four of our group getting ready to distribute the info, late in the afternoon when people were leaving work. We were shy at first, but paired off and handed out fliers, one Russian speaker in each pair. Local people seemed entirely unaccustomed to fliers, and nearly everyone took and read one. We did have several local people join us in the following days, and, I am sure, many who became aware of the project.

The woman with me in the second photo is Agnes, who we'd met a few days earlier and came to join us on the plaza. Pedro had originally met her when he stopped to look at what looked like a swastika graffitied on a wall, and Agnes stopped to talk to him. Agnes, according to Pedro, was Jewish, or had been, but was now a devoted Baptist. I never got to hear more of that story, but would liked to have. Had she been a hidden child? I asked, through Pedro, if she had lost relatives in the Holocaust, and she began to cry. Agnes invited us to dinner at her house, an invitation, unfortunately, that we never had time to accept.
But on this day, she had brought us cans of Coke to drink, even though it seemed as though she was on a very limited income. I was grateful for two reasons, even though I am usually not a Coke drinker, and had Pedro thank her doubly for me. The first reason was just my thirst, on this hot afternoon. The second reason is that I have quite a collection of ordinary items, like soda cans and cereal boxes, at home, from many countries to which I have travelled. I have used these in the past in presentations for elementary school children , focussing on both the similarities and differences between people around the world. More about this at some later point. Suffice it to say now that I have perhaps a dozen suitcases full of various artifacts from many places, to which I can now add a Coke can with writing in Russian. And when I show it to children, I will always think of Agnes. I told her that, through Pedro, and hope she understood.
Posted by Joanna at 1:33 PM